Key West was an amazing vacation destination and I would go back in a heartbeat. We (Josh and I) were there from Tuesday May 9 – Sunday May 14 2017.  Key West has the feeling of being away from it all on a tropical island yet is in the good ole US of A. Below is a recap of all the activities we did and all of the destinations on the island we went to while there:

This wasn’t your typical corny tourist tour. Lloyd is an eccentric fella and the tour includes smelling various flowers, eating random plants that I would have otherwise walked by (tumeric, almonds, exotic cherries, and others), and him chopping some coconuts with a machete. Lloyd is full of random anecdotes of living on the island for 20+ years and Key West history. Lloyd covers a good number of destinations including a wounded Bird Sanctuary, the Key West Garden Club, Higgs Beach, and the outside of former homes of famous Key West residents such as Judy Blume and Tennessee Williams. Luckily it was in the low 80s when we did this. If it were any hotter it could have been extremely hot. I re-applied sunscreen upwards of 7 times for safety. Definitely pack water, and wear a hat.

Shutting Down the Bike Tour

Definitely an essential Key West Activity. We really enjoyed this and probably took about 1000 pictures of ourselves on it. You are out on the boat for about 2 hours and there is beer and wine being served the whole time. The sunset off of the water was beautiful and will present many photo ops as well. Being someone who gets motion sickness very easily, the ride was smooth and I was completely fine. The casual buzz could have helped with that. 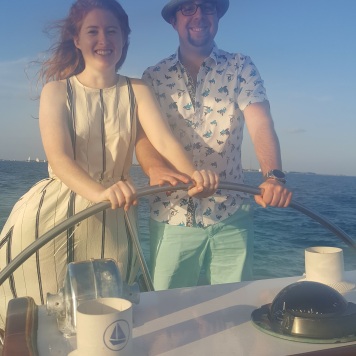 It’s a nightly tradition of sorts for Street Performers to go on here around Sunset. The highlight for me was this guy who had a set of trained cats that he had jumping through hoops including a hoop lit on fire. There were also vendors selling fresh ass coconut water after chopping them. This is a prime spot for a sunset instagram also. 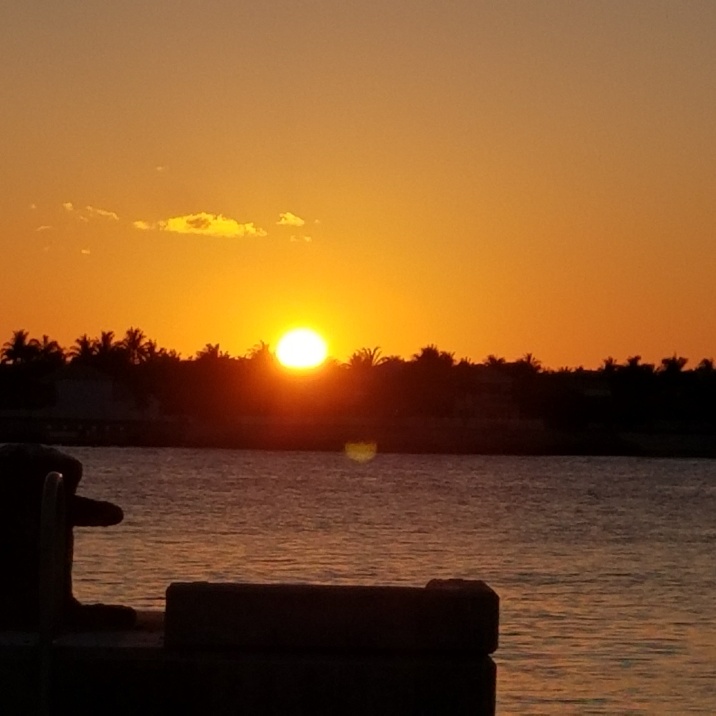 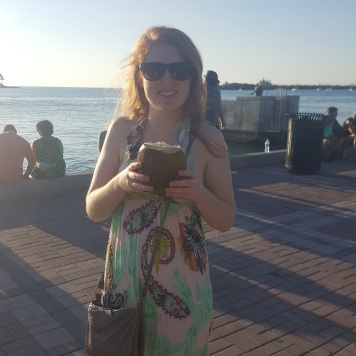 There are a TON of art galleries in and around Duval street in Key West that were really cool to check out. There was a ton of high end art/photography as well as collections of paintings/photos of famous artists, athletes etc. that were signed. The people that work at them were very friendly and interested in chatting with people walking through.

There was also a ton of cool street art. There were some street artists that were producing/selling original pieces of art at their spots on the street. We picked up some cool paintings from a man named Jean Paul who termed himself “The Picasso of the Ghetto”. 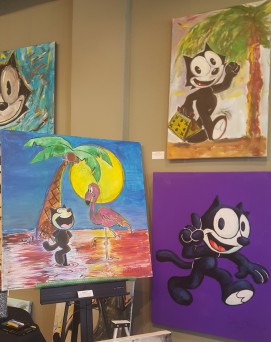 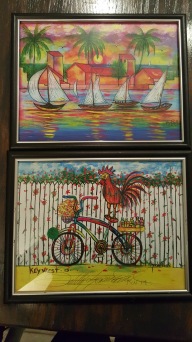 Kayak and Snorkeling Tour – Island Ting: This was a cool experience, however if you are not a boat person I would probably sit this one out and find something else, or load up on the dramamine.

Key West Winery: We got a Groupon to go here for a wine tasting. The wine tasting probably lasted between 5-10 minutes, and consisted of picking some wines that they had out for sale and then trying them. It’s more of a tasting room/wine store then a winery. They had some unique offerings with different southern fruits and Key Lime. Included with the package was a to go pouch of wine. I wouldn’t put this high on my list of things to do since it wasn’t really an experience. But, if you are in the market for wine and want to get out of the sun you could kill a little bit of time here.

Key West SongWriter’s Festival: We had no idea that there was a Song Writer’s festival in Key West until we got down there and everyone was talking about it.  Apparently it is an annual festival where a ton of country music song writer’s come down to Key West and hold a week long convention of sorts. There was live country music everywhere in all of the bars and restaurants, which was mainly the songwriters singing but they were still really good. There was a whole schedule of events and which locations. The best part of it was that there was a free street concert at the end of the week, featuring Cam, Marren Morris, and Old Dominion. All of them were amazing. The concert was held at the end of Duval street. Duval street was crowded but it wasn’t as hectic as I expected. You could easily get close if you stood on the sides or in the back. 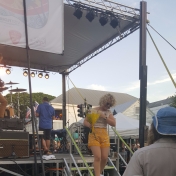 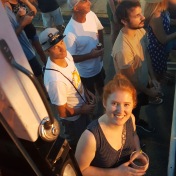 Another Celeb… JK just me

A lot of the people that live in Key West were quick to say “We aren’t known for our beaches”. The beaches were beautiful but a little different than I expected. I was expecting sprawling sandy beaches where there were places to get drinks right on them. It was more of a state park scene where it was kind of rocky or small public beaches that were crowded. We ended up spending more time at the pool just because it was easier, but the beaches are definitely worth checking out. Some of the beaches such as Higgs, and the Dog Beach, we saw but didn’t spend much time at. Also, some of the hotels ad private beaches for guests.

Fort Zachary Taylor: The walk to get here in the sun on pavement seemed to take eternity, I thought I was going to fry on the pavement. The sand slash getting into the water was pretty rocky, but there are some great views slash pictures to be taken here. You could post up for a day here, there were picnic tables and some refreshments. It would be best to back a cooler with drinks etc if you are going to be here for the day just because it seemed like there was only one restaurant and you are far away from everything else. 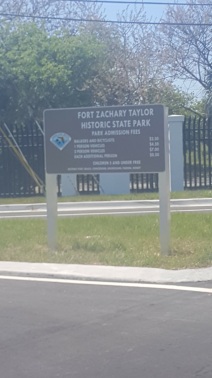 Bahia Honda State Park: This was about an hour away and we stopped by on the way back to Miami. The beach was beautiful. If you aren’t staying near here I wouldn’t bother going, it’s definitely a day trip type of place and there’s not really anything here you can’t get at Fort Zach. The concession/restaurant place didn’t have anything that I would consider edible, however J treated himself to a corn dog and an energy drink. 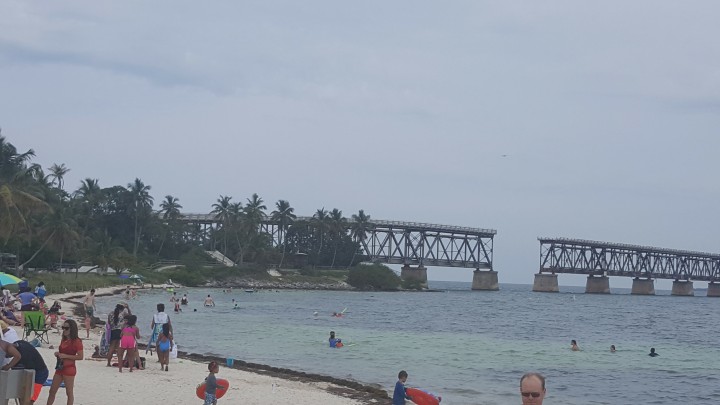 Butterfly Place: This was a quick trip that was definitely worth it if you are into nature. Essentially  you walk through a greenhouse that is swarming with beautiful butterflies. I kind of imagined some of them flocking to me but that didn’t happen. I actually didn’t see any of them land on anyone. It’s actually pretty hard to get a good picture because they are flying everywhere. There were also flamingos inside the green house, and some miscellaneous birds. It is super hot and muggy inside that greenhouse, but you likely won’t be there for very long unless you really take your sweet time.

We popped into many different bars and restaurants and there was honestly nowhere I didn’t enjoy. There were so many bars we were in a one drink and move on situation a lot of the time just to check things out. We also didn’t do many sit down meals for that reason and because we were doing different touristy things. They also had breakfast at the inn we stayed at, and that was pretty fresh so we ate there most mornings to get moving.

Amigos Tortilla Bar – This place we stumbled upon looking for some quick Mexican and I was pleasantly surprised. I got a burrito bowl with grilled fish and it was delightful, fresh, healthy and the service was great/quick. We actually came back here a second time while waiting for the SongWriter’s Festival concert and it was just as good the second time.

Louie’s Backyard – Fine Dining type place. Definitely call in advance to go here. It was delicious here and there are great views of the sunset and the beach which is right beside it. We called for a reservation and they didn’t have many openings, however when we were actually there it wasn’t packed. I got some swordfish that was delightful and Josh got prime rib which he loved. They had outdoor and indoor seating, we were right on the line. They also had a tapas type restaurant on the upper deck that we wanted to try but they didn’t have any openings that worked for us, so we will have to hit that next time.

The Cafe – Great Vegetarian/Vegan spot that we went to for lunch. No outdoor seating, but good food and sangria. Your boy Lloyd from the bike tour dishes out Sangria coupons here at the end of the bike tour.

Cuban Coffee- You can get this pretty much at any cuban place and it is delicious. It is strong and has a distinct flavor to it.

Key Lime Pie on a Stick – Not much more to say then that, other than the fact that it’s covered in chocolate. It came in a package out of the fridge, and miscellaneous stores had it.

Places for Next Time:

There were a couple popular things we heard about but didn’t do:

Ernest Hemingway house: I intended to go here but I heard on multiple occasions that it was basically a house that had a ton of cats and smelt like cat piss so we ended up opting out of this.

Dry Tortugas: I heard multiple people talking about taking a plane ride over to Dry Tortugas which is an island where you can go for a day and go snorkeling. I heard the plane ride was amazing. This just seemed like a lot for my weak stomach and pale skin so we didn’t do this day trip but I would definitely do it upon a return trip.

Latitudes: 5 star restaurant on an island you have to take a boat to, also heard this was awesome.

This site uses Akismet to reduce spam. Learn how your comment data is processed.